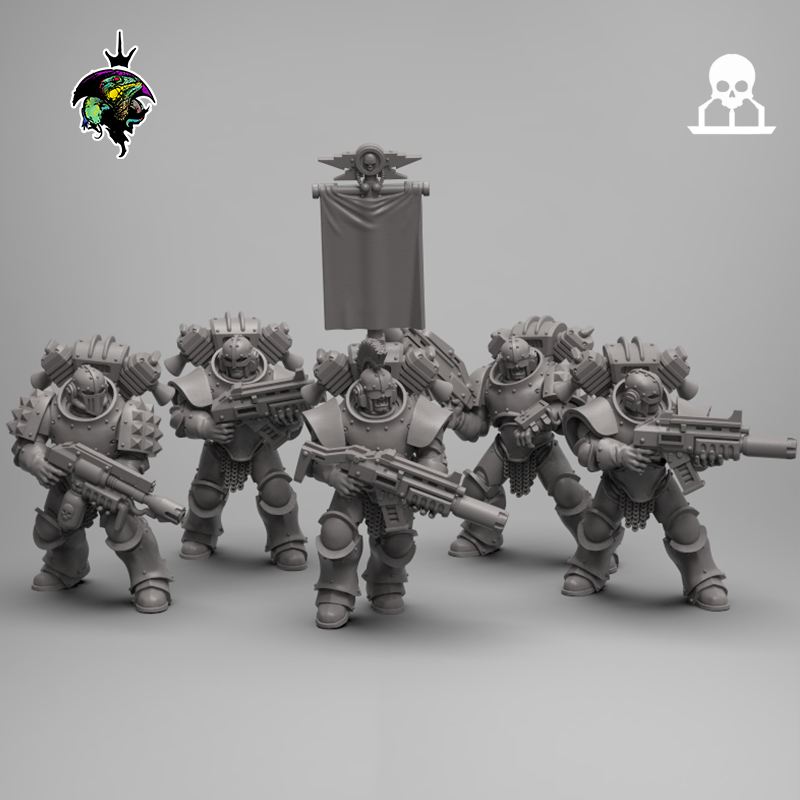 The Geno Tyrants are superhuman warriors created by the Space Lich to serve in his Lich Legions and aid him in his quest to bring order and enlightenment to the galaxy. Monstrous brutes encased in heavy power armor and wielding gigantic weapons that can hardly be lifted by a mortal man, they are an unstoppable force to match the implacable will of their creator.

When the Space Lich first revealed himself to the inhabitants of the civilization that had grown at the base of the mountains that covered his crypt palaces, they fled from him in horror. Unlike the thousands of sculptures erected in every city today and the millions of paintings depicting him as the handsome savior of Terra, he is in fact a shriveled corpse. An undead thing wrapped in burial shrouds and golden armor, and animated by a terrible will and unimaginable magical power. They sent parties into the dark tunnels that lead into the mountains, never to return. These “grave robbers” were the stock from which the master biologist experimented on and enhanced the human species, turning them into the brutal genetically and biconically enhanced warriors known today as the Geno Tyrants. The bravest human souls who went into those dark tunnels and beheld the necropolis cities and gargantuan under spires deep within the mountain were stretched, torn apart, and reassembled. Their genes sequenced, and every molecule of their DNA inspected and altered by the machines and medical automata that had sustained the lich for millennia. After decades of experimentation and refinement into the ultimate human warrior, they received an array of bionic implants to heighten their combat potential. The most potent of these being known as the Orcheisium Pendula, a second pair of bionic testicles that gives the Geno Tyrant their massive physique, incredible super strength.

“A single man can do great things, aided only by a grim determination and iron will to succeed. A giant with four nuts and an auto-bolt rifle is another thing altogether.”
-George S. Patton

These godlike creations of the Space Lich were given heavy suits of armor powered by enormous v twin engines, which made their movement within the bulky suits effortless and lightning fast. The suits were strong enough to thwart all but the most destructive of battlefield weapons. Stories of battlefield exploits where Tyrants snatch incoming rockets out of the air and hurl them back at the enemy are common. The powered armor also allowed them to easily wield heavier, more powerful versions of the exotic weaponry carried by the techno warlords and barbarian clans which had taken over the wastelands surrounding the mountainous region which was home to the lich’s necropolis.

Each of the Lich Legions strives for excellence in all things marshal and to prove that their legion is superior to their sister legions. Competition between the legions is high, and sometimes legion rivalry can escalate to the point of all out warfare. It is not uncommon for Geno Tyrants from different legions to come to blows when tempers run too hot.

This glorious introductory set will allow you to create your own legions of Geno Tyrants and includes many bits and accessories to create a variety of Tyrant legions.

Contained within these sacred zip files and folders of untapped potential there are both supported and unsupported stls. Additional poses for legs and arms can be achieved by mirroring stls in your slicer.  In order to fit the arms into the torso sockets they must bend slightly outward during assembly. Brittle resins such as water washable styles are not recommended. Any resin with characteristics similar to Sirayatech Fast or ABS like resin are highly recommended.

There are no reviews yet.

Be the first to review “Geno Tyrants” Cancel reply

STL files are digital products used to print miniatures. If you're new to 3D printing join our discord community. We'll help you out! Dismiss